Rydell High School is the primary setting of the 1978 film Grease and it's 1982 sequel Grease 2.

West of the main building, the auditorium is where Stephanie Zinone reamed Michael Carrington with Cool Rider (Song). In the same area is where Johnny Nogerelli and Michael did their transaction, in the fenced-in hallway. The entrance for the June Moon Talent Show was on the auditorium's west side.

The Rydell cafeteria, where Charades was filmed, is actually not in the actual Excelsior High School cafeteria - that's actually at the north end of the school, near the tree Stephanie was leaning against when Mr. Stuart arrived.

Where Coach Calhoun was drilling the T-Birds, using a tackling sled, which - on Calhoun's orders - they pushed towards an open hole in the field. 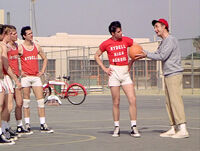 Add a photo to this gallery
Retrieved from "https://grease.fandom.com/wiki/Rydell_High_School?oldid=12482"
Community content is available under CC-BY-SA unless otherwise noted.