Retrieved from fox.com
Julianne Hough is an actress, singer and two-time professional champion of Dancing with the Stars. She returned to the hit show in 2014 as a judge and recently headlined MOVE Live on Tour 2015, the second North American tour of the all-original stage production she created and performed with her brother, Derek. She will be seen next opposite Zac Efron and Robert De Niro in the comedy Dirty Grandpa and her film credits also include Safe Haven, Paradise, Rock of Ages, Footloose and Burlesque. A successful recording artist, her 2008 self-titled debut album hit the Billboard Country charts at No. 1 and entered the Billboard 200 at No. 3, marking the highest debut for a country artist in more than two years. Her first two singles from the album earned Hough her first two Academy of Country Music Awards for Top New Female Vocalist and Top New Artist.

She currently resides in Los Angeles. 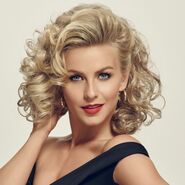 Sandy Young (Grease Live! (2016))
Add a photo to this gallery
Retrieved from "https://grease.fandom.com/wiki/Julianne_Hough?oldid=10937"
Community content is available under CC-BY-SA unless otherwise noted.