Carly Rae Jepsen is a Canadian singer, songwriter and actress. She portrays Frenchie in Grease: Live.

Retrieved from fox.com
Multi-Platinum-selling Grammy Award-nominated singer and songwriter Carly Rae Jepsen most recently released her critically acclaimed new album, E·MO·TION, and premiered the video for her brand-new single, Run Away With Me- The first single released from the album, I Really Like You, became a global Top 40 hit, while the video is Vevo-certified with over 100 million views. E·MO·TION is the follow-up to Jepsen’s U.S. debut album, Kiss, which featured her blockbuster breakout hit, Call Me Maybe. The single climbed to No. 1 on the iTunes Singles charts in over 47 countries and has sold more than 18 million singles worldwide to date. It earned Jepsen 2012 Grammy Award nominations for Best Pop Solo Performance and Song of the Year. Kiss also spawned the follow-up hit “Good Time,” a duet with Owl City, which has been certified double-Platinum. Jepsen spent much of 2014 starring in the Broadway production of Rodgers & Hammerstein’s Cinderella. 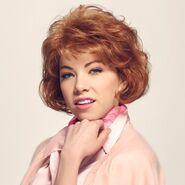 Frenchy (Grease: Live)
Add a photo to this gallery
Retrieved from "https://grease.fandom.com/wiki/Carly_Rae_Jepsen?oldid=12553"
Community content is available under CC-BY-SA unless otherwise noted.